In 1967, Sir Godfrey Hounsfield constructed an early Computed Tomography (CT) scanner in the Central Research Laboratories of EMI in England which took 9 days to complete data acquisition and a further 2.5 hours to produce an image.

The first clinically available CT device was installed at Atkinson Morley Hospital in London in September 1971. After further refinement of the data acquisition and reconstruction techniques, images could be produced in 4.5 minutes.

On October 4, 1971, the first patient with a large brain cyst was scanned.

Hounsfield and Cormack received the Nobel prize for medicine in 1979 for their pioneering work in medical Computed Tomography.

Ever since, there has been a rapid evolution in CT scan technology from the first-generation scanners with a single x-ray source and a single detector to current modern systems hailed as 4D CT which are so accurate and rapid they can capture a beating heart.

In 2015, it was estimated that over 80 million patients underwent CT scanning in the United States.

Disadvantages of conventional Multidetector CT (MDCT) include high doses of radiation exposure, price, size of the scanner and presence of metallic artefacts.

These concerns led to the development of Cone Beam CT (CBCT) by a research group in Italy with the first commercial scanner introduced into the European market in 1996. Initially, CBCT was used by dentists in the workup prior to implant and oral cavity surgery. Subsequently, its use was extended to other specialties such as maxillofacial surgery and otolaryngology.

The main difference between conventional CT scanners and Cone Beam CT are:

-          Cone beam CT uses a low-power flouroscopy tube that produces a cone shaped x-ray beam. Images are captured onto a flat panel detector or a charge coupled device (CCD) in a single rotation with no overlap resulting in much lower radiation exposure. From the data set obtained multiplanar reformations (MPR) and 3D rendering may be created. 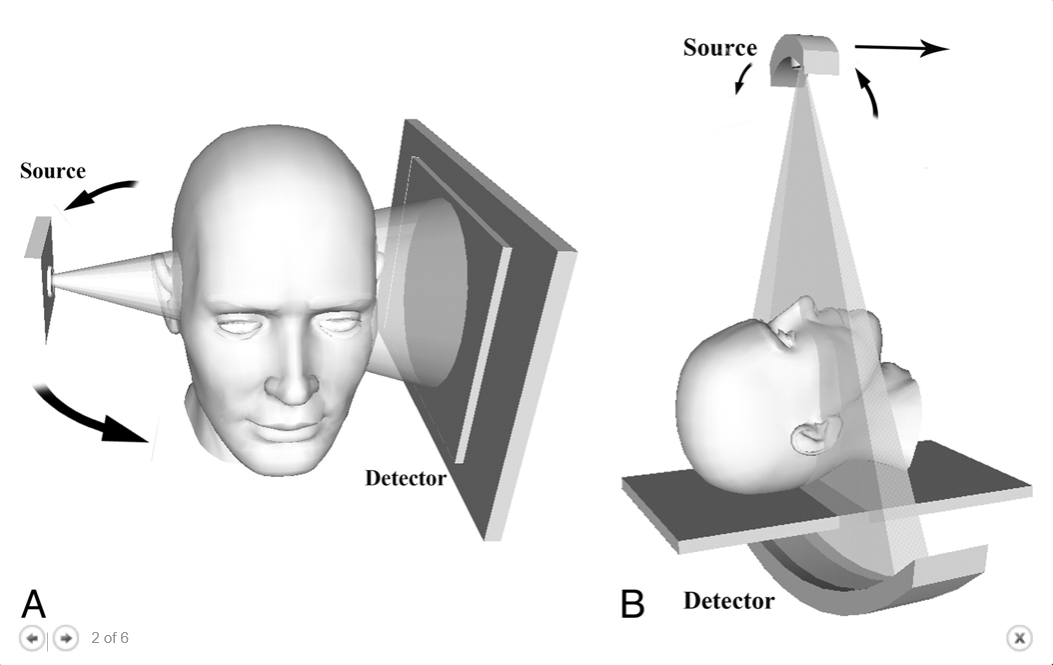 The main advantages of CBCT include high spatial resolution and lower radiation dose (up to 98% reduction in dose compared to conventional MDCT). This is especially important when considering imaging young children. CBCT is less susceptible to metallic artefact. The machine size is more compact with a reduced physical footprint. It is more cost effective and allows point of care imaging.

Disadvantages of CBCT are that images are more liable to motion artefact due to the slightly longer acquisition time and the fact that the patient must be very still which may be a challenge in young children. In addition, contrast media cannot be used which reduces utility in neoplastic and vascular pathology.

Many manufacturers construct cone beam scanners, and their parameters will differ. In some scanners the patient is in a sitting position, in others, the patient is supine. Most machines support the digital imaging and communications in medicine (DICOM) format. The images can therefore be used for most software applications utilized by conventional CT.

CBCT devices may be divided into four categories based clinical site and field of view (FOV):

Examples of 2 popular CBCT scanners are shown below. 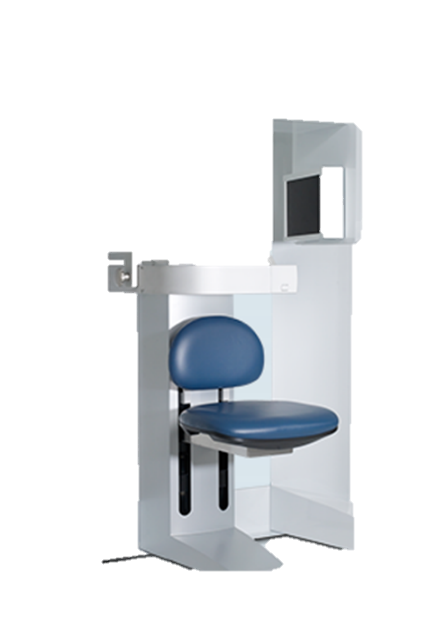 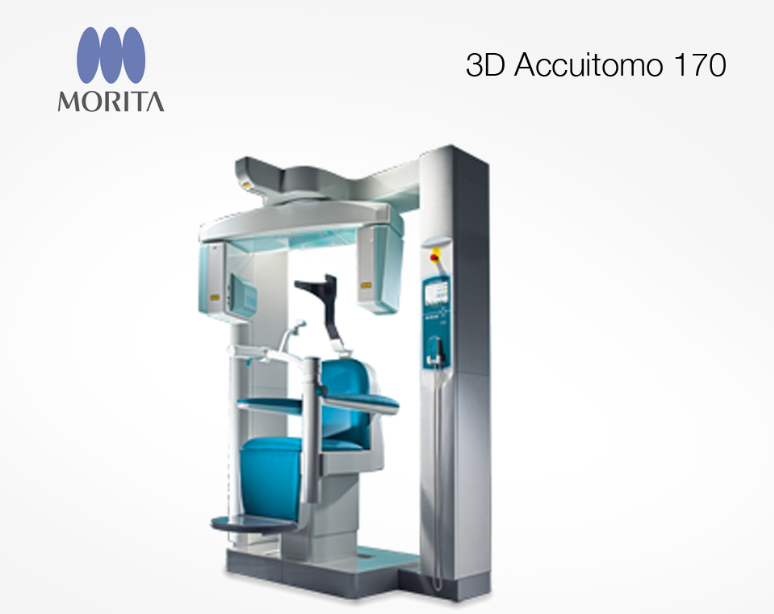 The American Academy of Otolaryngology, Head and Neck Surgery released a position statement in 2013 regarding point of care imaging stating that:

Preoperative imaging is gaining even more importance in this age of medical insurance claims and malpractice litigation.

Recent advances in CBCT technology have greatly improved diagnostic quality and therapeutic safety in the field of Otolaryngology, Head and Neck Surgery. Imaging is vital in the diagnostic work up and follow up of head and neck pathology thus helping the surgeon select and plan the best therapeutic modality. Because of its enhanced resolution and lower radiation dose, CBCT is finding its way as the imaging modality of choice in many otolaryngological conditions.

Patients presenting with conductive hearing loss will best be served with a CT scan. In patients with suspected recurrent or residual cholesteatoma, a diffusion weighted Magnetic Resonance Imaging (MRI) will be of more value.

Prior to middle ear surgery, CT is important to assess the relevant anatomy such as the level of the tegmen tympani, facial nerve course and any ossicular affection.

CT is also important for assessing the extent of pathology and planning of the surgical approach. Scutum defects are a sign of early cholesteatoma, lateral canal fistulas, tegmen defects and ossicular erosion are signs of advanced disease which may necessitate a postauricular mastoid approach and ossicular chain reconstruction.

With current CT technology and resolution, otosclerosis can be detected in over 90% of cases.  Superior semi-circular canal dehiscence can also be visualized with some degree of confidence.

For the work-up of cochlear implant candidates, MRI is the main tool to determine the accessibility and implantibility of the cochlea, the presence of a normally sized cochlear nerve branch and the absence of lesions at the level the auditory pathways or the auditory cortex. However, CT remains important to provide the surgeon with a reliable roadmap to execute the surgery. So in many pathological entities of the temporal bone, both MRI and CT have their specific roles. 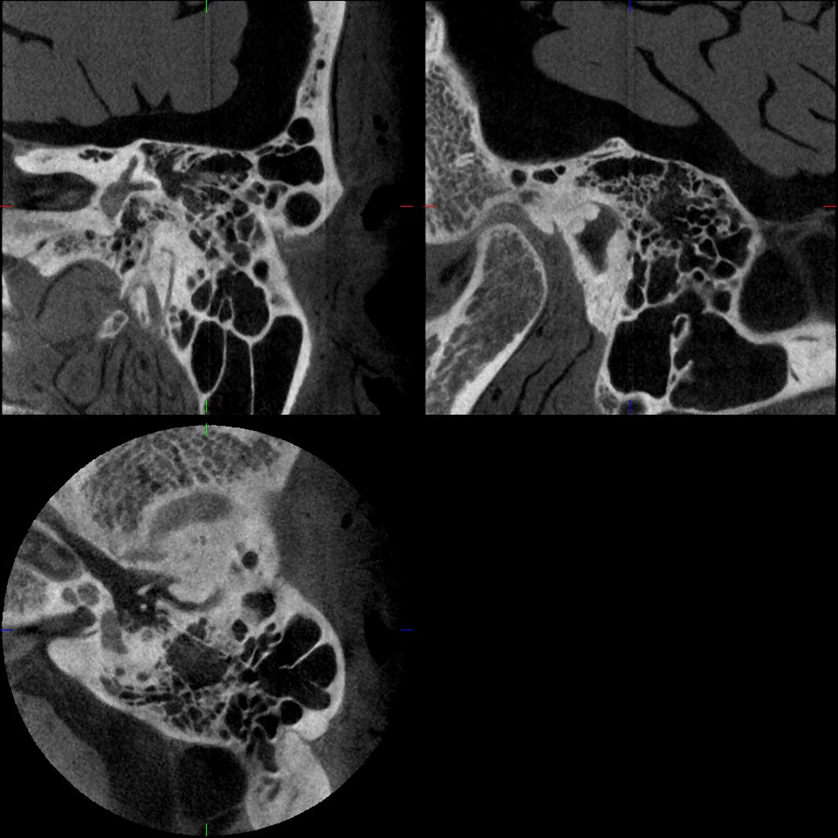 Figure 4: CBCT of the Temporal Bone

CT is the gold standard for the assessment of most sinonasal pathology such as chronic sinusitis, sinonasal polyposis and fungal sinusitis.

It is the imaging modality of choice to visualize the anatomy of the paranasal sinuses prior to surgery. This is especially important if there is a history of previous surgery as anatomical landmarks may be missing or altered.

Of particular importance are vital structures such as the internal carotid artery, which may project into the posterolateral sphenoid sinus. The vidian nerve and the second division of cranial nerve V are other structures projecting into the floor of the sphenoid sinuses. These and all other significant structures of the paranasal sinuses including the anterior cranial fossa, the cribriform plate, the cavernous sinuses, the orbits, and the optic nerves must be observed by surgeons to avoid potential postoperative complications. 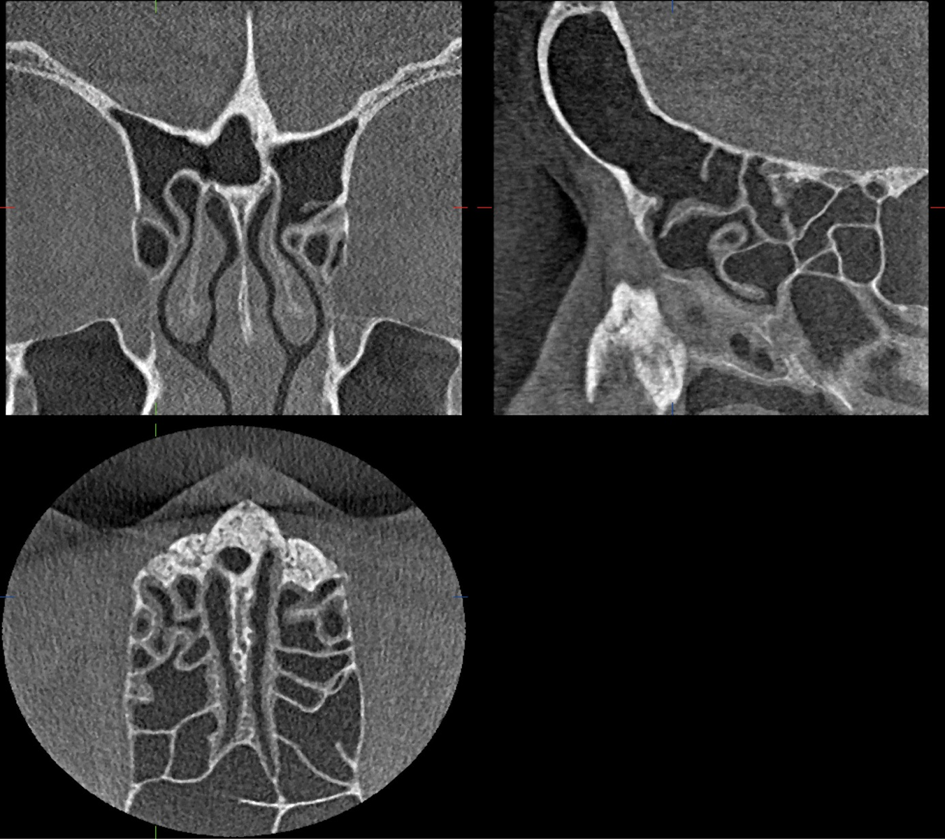 Figure 5: CBCT of the Paranasal sinuses

CBCT has rapidly become the imaging modality of choice for many otolaryngological conditions. It provides high resolution, point of care imaging while exposing patients to much lower levels of radiation than conventional MDCT. CBCT will continue to grow in popularity until other less invasive forms of imaging are developed. Optical Coherence Tomography (OCT) is a developing technology showing promise in head and neck imaging. It is similar to ultrasonography but uses infrared light instead of sound. It provides non-contact, non-invasive, cross-sectional imaging at micron-scale resolution. The technology may one day be incorporated into endoscopes allowing real-time intraoperative imaging. Experimentally, it has been capable of imaging the vibrations of the tympanic membrane opening the possibility for functional imaging. 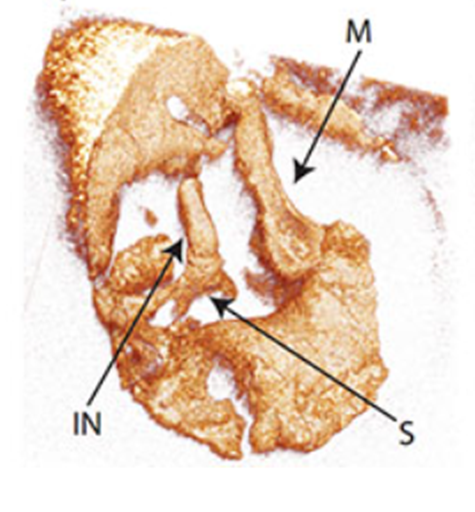